Ok, so you've played a great game and now you're a pawn up in an endgame! Nice work!! But how do you take advantage of this extra pawn you have? Let's take a look at some of the strategies used. Hints are provided at bottom of page! 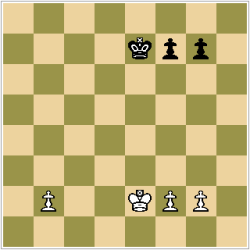 a) White to play and queen a pawn.  What strategy would you use? 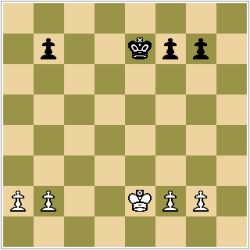 b) White to play and queen a pawn.  What strategy would you use? 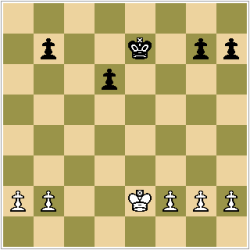 c) White to play and queen a pawn.  What strategy would you use?

b) This situation is similar to the first situation, but a little trickier.  Again the white king moves forwards to the center at d4, putting itself  in control of both sides of the board, but this time the white pawns will need to move forward too. The closer you can bring the white king with its two white king side pawns towards the center or beyond, the easier it will be to pick off the two black pawns and race a white pawn to queen.   You see, at some point, like it or not, the black king is going to have to abandon its two black pawns on the king side (right side) of the board to stop one of the white pawns on the queen side (left side) from queening. If the black king never leaves to defend the situation on the queen side, then one of those white pawns on the queen side will eventually reach the other side and queen. Be carefull though, as white,  to protect your kingside pawns from being taken.